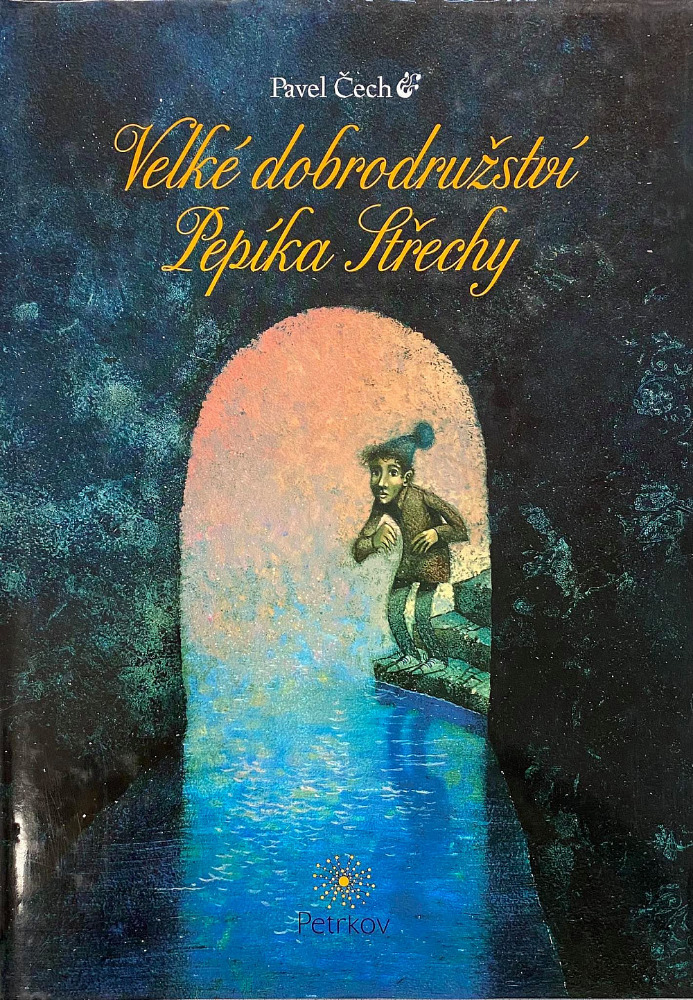 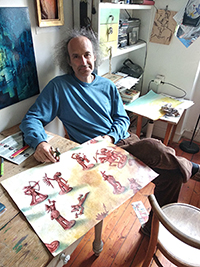 Pavel Čech
Pavel Čech was born in 1968 in Brno. He trained as a locksmith and first made a living repairing machines in an engineering plant. However, he was quickly drawn to the visual arts: he took private lessons in graphic design and began to paint using oil paints. Since 2004, after having worked for fifteen years as a firefighter, he is a freelance artist. His author’s books and comics have won him eleven awards, including the prestigious Czech annual book award Magnesia litera, in the children and youth books category. His works as an illustrator (Jean Giono, Marianne Curley, Angie Sage, Michal Ajvaz, Jiři Kratochvil, Jan Skácel ...) have earned him the recognition as the sole true successor to illustrator and filmmaker Jiří Trnka.
HP:www.pavelcech.wz.cz
Japanese Page

Pepík Střecha is a shy young boy. In his school, he is left aside by the others. Lonely, in love with adventure novels, he is stuttering. When he has to jump off the diving board at the pool, he remains paralyzed with fear and climbs down the ladder while the other boys make fun of him. But things start to change after the arrival of a new classmate, the mysterious Elzevíra. The two gradually become friends. And when suddenly, one day, Elzevíra disappears, Pepík takes his courage in both hands and decides to go looking for her. In an interview, Pavel Čech says: “I have always been passionate about this sort of pivotal moments: when we meet someone who will influence us in a decisive way, or when, at the beginning of the book, my hero finds a mysterious blue pebble in the street. Those moments when our daily life is turned upside down by something that initially seemed trivial to us…” What follows is a marvellous initiatory journey, half realistic, half poetic… 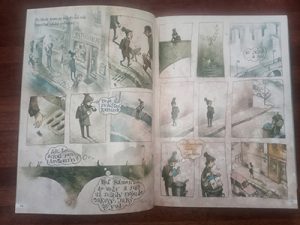 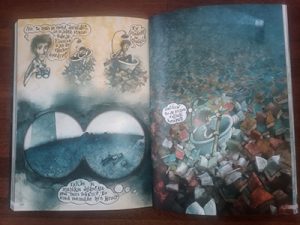 〈Thousands of Comics〉
Under the Thousands of Comics label the Tokyo-based Thousands of Books publishing company publishes comics from around the world in Japanese translation. Many foreign comics remain virtually unknown in Japan, including some of the masterpieces of Franco-Belgian or North American comics, as well as lesser-known works from various corners of Europe, Asia, Africa, Latin America and elsewhere. Led by renowned translator Masato Hara (translator, among others, of Nicolas de Crécy, Alejandro Jodorowsky, Benoît Peeters, François Schuitens, David Prudhomme, Thierry Groesteen and many others), the Thousands of Comics collection aims to fill this gap. The Great Adventure of Pepík Střecha will be the first Czech comic ever translated into Japanese. 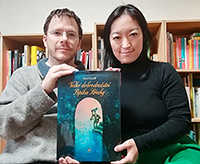 Profiles of the project’s supervisors and translators

Jean-Gaspard Páleníček
Poet, writer, art and film curator, born in Prague, Czech Republic, in 1978. His grandfather was world-famous pianist Josef Páleníček. After performing as an actor at the Prague Orfeus theatre company, he worked as artistic director of the Czech Cultural Center in Paris. He has published four literature books and written the scripts to the comic book “Iogi” (awarded Bronze at the 15th Japan International Manga Award Award in 2021). He has contributed to literature and art magazines such as Revolver Revue, Analogon, Po&Sie and Europe. As translator of literature, comics and specialised texts on art, film and music, he has had several dozens of publications and collaborated with art institutions such as the Grand Palais, the Pompidou Centre, the Prague National Gallery or the Museum of Decorative Arts in Prague. He has also worked as advisor and author of texts on film, with companies and institutions like Malavida Films, the Forum des images in Paris, the La Rochelle International Film Festival or the Premiers Plans Angers International Film Festival. He has given lectures at Sorbonne University Paris, Meiji University, Seijo University and Joshibi University of Art and Design.

Mio Takamatsu-Páleníček
Japanese interpreter and translator from French, born in 1978 in Tokyo. She has completed her Master’s studies at the Paris Sorbonne University Faculty of Clinical Psychology. The cultural projects she has cooperated on as translator and advisor include the exhibitions “100 Years of Czech Comics” (2017, Yoshihiro Yonezawa Memorial Library of Manga and Subcultures, Meiji University), “Karel Zeman: Trick Cinema Avantgarde” (2010, Kariya Museum and others), “Mucha and Japan, Japan and Orlik (2020, Wakayama Museum of Modern Art, Chiba City Museum of Art and others) or “Fashion in Blue”, dedicated to Japanese and Czech indigo dyeing techniques (2021, Museum of Decorative Arts in Prague), often in cooperation with the I. D. F. Inc. company.